Thousands around the world have already taken advantage of this revolutionary, state of the art technology to keep themselves and their families safe!

The Bacteria Killing Robot is designed to glide over and between the bedsheets, eradicating bacteria in its wake, it’s that simple. Place it on any surface, bed or object and let it get to work! 4 UV-C lights with built-in AI help eliminate 99.99% of the bacteria, dust mites in your mattress, and quilt.

It doesn’t suck up debris but instead uses ultraviolet light in what’s called the C-spectrum, a wavelength at which light has disinfectant properties and that is often used in hospitals. Works on over 40 types of materials and will make sure to remove up to 99.99% of all germs and bacteria on the place you spend 1/3 of your life on (your bed!) 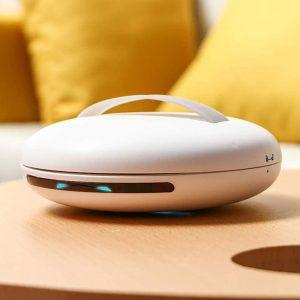 This pocket-sized robot can be put into handheld mode to eliminate bacteria on surfaces like light switches, pillows, phone screens, bathroom fixtures, TV remotes, and anything else that comes to mind!

This compact-sized robot can also work as a 4800mAh portable fast charger, there’s one more reason to bring this robot on your next trip!